These holdings are indexed fully and can be searched for on external pageETH Library @ swisscoverycall_made.

Thomas Mann’s personal library, which was bequeathed in the same form it was in at the author’s final residence in Kilchberg, is a key part of the Thomas Mann Archives’ holdings. It comprises around 4,300 items, including books, journals, newspaper articles and typescripts, including works by the author in German and in translation, secondary literature on the life and work of Thomas Mann, works by other authors, dictionaries and encyclopaedias.

The library holdings had an eventful history during Thomas Mann’s lifetime in light of the constant changes triggered by the Mann family’s exile and transatlantic moves. As a result, the personal library does not contain all the books Thomas Mann ever owned or read. The present corpus is primarily composed of the copies which his heirs defined as belonging to the library following Thomas Mann’s death and were donated to the Thomas Mann Archives. However, the holdings are still growing, for instance through restitution procedures, access to books which remained in Golo Mann’s possession until his death or the acquisition of books which once belonged to the author.

Digitisation and indexing of the marginalia

Thanks to the excellent state of the bequest, the library affords an insight into the literature which Thomas Mann embraced, read and used as sources for his texts. Many of the copies contain markings made by Thomas Mann’s own hand and other people, not to mention dedications, inserts and other signs of usage. The copies featuring these markings have been digitised within the scope of a project and the marginalia individually indexed.

Database of the estate library

The database on the reading traces in Thomas Mann's estate library is available online to the public with the already rights-free books.

The digital copies and full texts of the copyright-protected books are accessible on site in the reading room of the Thomas Mann Archives. 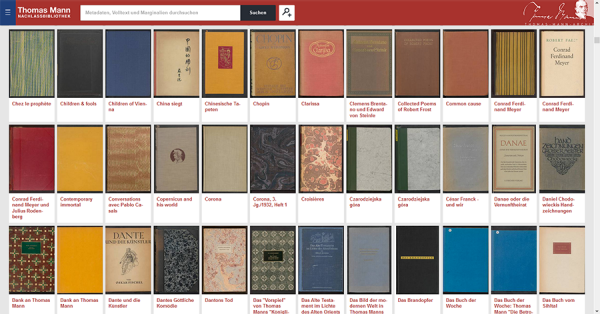 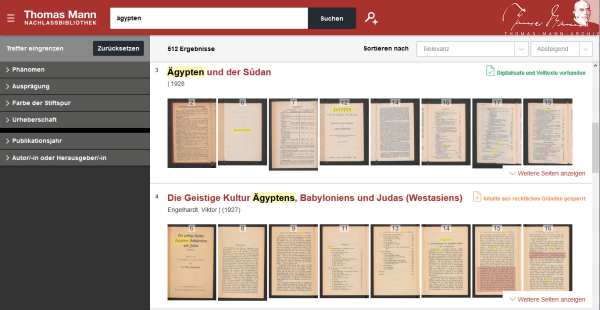 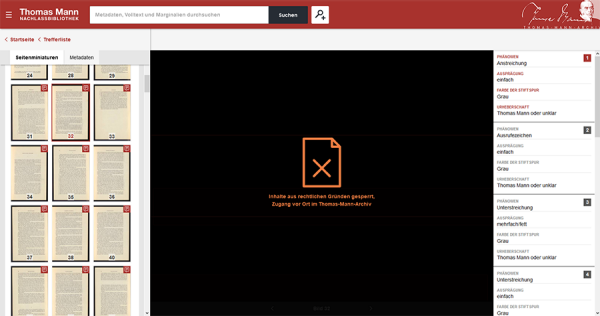 Documents on the database and the estate library

In addition to the search functions in the online database, further information is available here.

After Thomas Mann's death, Katia Mann continued to live in Kilchberg until her death in 1980. The library bequeathed by Katia Mann was later donated by the family to the Thomas Mann Archives. The library's 421 titles are searchable in the library catalogue and can be consulted in the reading room of the Thomas Mann Archives. Many of the volumes were sent to Katia Mann as dedicatory copies, some bear traces of reading and other use. The following list contains all titles of the Katia Mann Library and notes the presence of such reading traces and dedications.